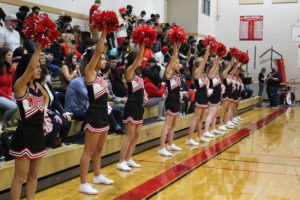 When a tradition runs deep, there are fond memories created, an excitement that many can’t explain and an overwhelming affinity to something extraordinary. It’s called Red & White Night at Seattle Christian School. After taking a year off due to state COVID restrictions, students, fans, alumni and faculty/staff were ready to celebrate with a kick off to the Warrior basketball season.

With record attendance, and health and safety protocol in place, Warrior fans enjoyed basketball games, sang to familiar songs from the talented pep band, applauded the upbeat performances and inspired school spirit from the cheerleaders and more! Elementary and secondary students alike decked out in their Red & White, loved the photo booth, pop-a-shots, Chick-fil-A meals, door prizes and a variety of contests.

All in all, Red & White Night was a huge success!  It’s one of those traditions that is never taken for granted at SCS. It brings unity, fellowship and a sense of being part of something remarkable! It keeps us #WarriorStrong. 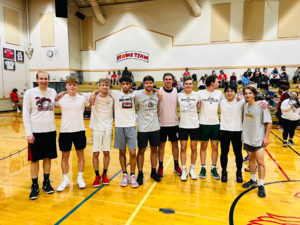 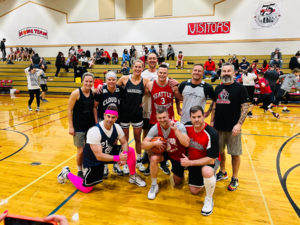 “Red and White Night was super fun! My brother Matt and I got a call from our buddy Casey Bell, who was recruiting top talent for the alumni basketball game he was pulling a team together for. I’m a bit out of practice but I know how to box out, so I said “Count me in!”. It wasn’t just fun, it was really, really fun. I got to see several friends that I haven’t seen for so long. The alumni game was at the end of the evening, so I like to think of it as the Grand Finale. It was “Old Alumni” vs “Young Alumni” and, of course, the “Old Alumni” took care of business! I had a pretty decent night – 2 pts on 1/8 shooting and a bunch of rebounds…and that was just in pre-game warm-ups! As for the game itself, I can’t really remember much – I was desperately out of breath after running one length of the floor so I had to sub myself out (hockey-style, which was fun). But I do remember the Collier siblings, Adam, Megan and Katie killing it, my brother Matt breaking his own ankles with his killer cross-over and Casey Bell nailing a 3 as time expired. IT WAS EPIC!

Thank You SCS for putting on a great event and for organizing the alumni game. I posted about it on Facebook and several friends said they’d love to go to Red and White Night next year if they know about it – and a few would join the alumni game if they had the chance. Fun fact: I was part of the very first Red and White Night in 1994/5. Cool to see the tradition has continued after all these years. And, who knows, maybe expanding alumni participation is the next big thing! “Count me in!” – Ryan Alvis (’96), alumni and game participant

Previous StoryEquipping Generations: This is Our Story!
Next StoryBigger Than Basketball